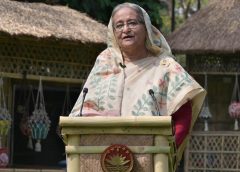 Meanwhile, with five new deaths reported on Monday, the total number of deaths in Bangladesh from Covid-19 has now climbed to 39

With the country continuing to see a steady uptick in coronavirus cases, Prime Minister Sheikh Hasina has said that the government has imposed a ban on all outdoor events and activities related to the observance of Pohela Boishakh or the Bengali New Year due to the coronavirus outbreak.

“The decision was taken considering public health concerns. The deadly coronavirus has started putting its ugly claws in our country,” she said while addressing the nation on Monday evening ahead of Pohela Boishakh 1427.

According to the Gregorian calendar, the Bengali New Year usually falls around April 14 or April 15.

The first day of the initial month of Boishakh of the Bengali solar calendar is called by many names, notably Naba Barsha, Pohela Boishakh, and Pohela Baisakh in various parts of Bangladesh.

Meanwhile, with five new deaths reported on Monday, the total number of deaths in Bangladesh from Covid-19 has now climbed to 39.

The country also saw a sharp rise in infections as 182 new cases were recorded the same day, taking the total number of people infected to 803.

Meanwhile, a large number of events are being canceled and postponed worldwide to prevent the spread of the novel coronavirus, which emerged in Wuhan, China, late last year and was labeled a pandemic by WHO in March 2020.

Many other noteworthy events, from conferences to festivals to sporting events, including the 2020 Summer Olympics in Tokyo, have been canceled or postponed because of the coronavirus.

The Prime Minister Sheikh Hasina has also said there is no food crisis now in the country as adequate food grains are there remain in government godowns (warehouses) and the houses of farmers while addressing the nation on Monday evening ahead of Pahela Baishakh 1427.

Noting that it had a bumper yield of Aman crops in the season, she said it is expected that there’ll also be a bumper production of Boro paddy in the ongoing season.

Special measures have been taken to maintain the supply and distribution of foods and agricultural products, Sheikh Hasina added.

Yesterday, she has stressed on the continuation of food production during the corona-virus outbreak and announced to create a incentive fund of Tk5000 crore for the agriculture sector. This made was made while addressing a videoconference with the concerned Deputy Commissioners (DCs) and officials of 17 districts under Khulna and Barisal divisions from her official residence, Ganabhaban, in Dhaka around 10:00am on Sunday, 12 April,, 2020.

The Prime Minister said many philanthropist individuals and organisations have come up with relief materials for the poor during this crisis. In a bid to ensure the order, these relief materials and assistance need to be distributed through local government bodies and law enforcement agencies, no separate disbursement, she said.

She urged the rich to continue to provide their assistance for the poor.

Sheikh Hasina said the government keeps its eyes on the situation and takes measures timely whatever necessary to check the novel coronavirus pandemic.