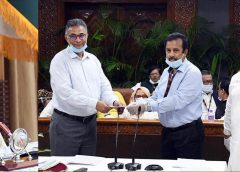 The Institution of Engineers, Bangladesh (IEB) donates to PM’s relief fund to combat coronavirus on 15 April, 2020

Engr Md. Abdus Sabur, President – The Institution of Engineers, Bangladesh and Science and Technology Affair’s Secretary, Bangladesh Awami League along with others IEB leaders handed over a donation cheque to principal secretary to the prime minister Mr. Ahmad Kaikaus in order to to combat coronavirus.

Prime Minister Sheikh Hasina attended the cheque handover ceremony through a video conference from her official Ganabhaban residence. Many others Government high official were also present in this program.

“Imbued with the spirit to do something for the country, we will stand by the government. All of us should come forward according to our ability and lend our hands to the people,” said the Prime Minister Sheikh Hasina and Mr. Ahmad Kaikaus.

Prime Minister Sheikh Hasina expressed her gratitude towards The Institution of Engineers, Bangladesh for making the donation to her relief fund at this moment of crisis like in the past.