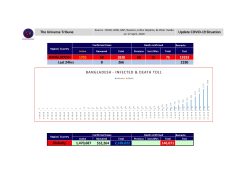 The tally of infections rose to 1,838 after another 266 new cases were identified by testing 2190 number of samples tested in last 24 hours, total sample tested 19,193 Health Minister Zahid Malik said on Friday.

So far 58 people have made recovery including 9 people in last 24hours from COVID-19.

On Thursday, Bangladesh first recorded the double-digit fatalities (10) from the pandemic announced by the World Health Organization (WHO), since the country declared its first death on March 18.

Meanwhile, global coronavirus cases have reached 21,69,022 as of Thursday noon. Besides, the global death toll from Covid-19 has jumped to 146,071 around the world, according to Worldometer.

Of those infected, 14,78,687 are currently being treated and So far 5,52,264 people have made recovery according the World Health Organization, Government of Bangladesh, Reuters, & other media.

Infections have been reported in more than 210 countries and territories since the first cases were identified in Wuhan, China in December 2019

China’s official death toll from the coronavirus pandemic has jumped sharply as the hardest-hit city of Wuhan announced a major revision that added nearly 1300 fatalities.

The new figures on Friday resulted from an in-depth review of deaths during a response that was chaotic in the early days.

They raised the official toll in Wuhan by 50 per cent to 3869 deaths. While China has yet to update its national totals, the revised numbers push up China’s total to 4632 deaths from a previously reported 3342.