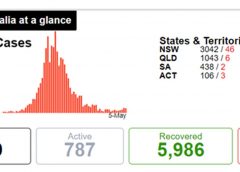 ‘CLUSTERS OF CASES’: Just the three words have been found that has turned to way of success the Australia.

The four countries worst hit by COVID-19 share a classification by the World Health Organisation that “we don’t want”, an Australian epidemiologist says.

The UK and US are considered by the World Health Organisation as primarily having community transmission of COVID-19. Picture Source: Getty Images

Pubs and gyms closed on Monday, March 23. Seven deaths had been recorded in Australia at the time compared to almost 200 deaths in the UK when they decided to shutter their cafes and restaurants the previous Friday, March 20.

“They’d had fewer than 10 deaths only about two weeks before that,” University of Sydney clinical epidemiologist Dr Fiona Stanaway told  noting the “big difference” is Australia acted earlier.

“The UK and the US didn’t do a lot of testing at the early stage of the epidemic so they didn’t get a good idea of how much infection there was happening and how many cases they had.

“That difference in timing of the response has been quite important.”

Australia’s daily numbers of COVID-19 as of May 6, 2020. Picture: Department of Health Source: Supplied

Australia’s primary transmission of COVID-19 is classified by the World Health Organisation as “clusters of cases”.

Comparatively, the United States, United Kingdom, Italy, Spain – the four countries to record the most cases of COVID-19 in the world – are all regarded by the WHO as primarily having “community transmission”.

Last month, the WHO changed the terminology it was using to focus on outbreaks and clusters worldwide, having previously drawn the line between “local transmission” and “imported cases only”.

“Classifications are reviewed on a weekly basis, may be revised as new information becomes available, and are based on the highest category reported,” the WHO says.

Clusters have appeared in areas such as Bondi and the Barossa Valley, aged care facilities including Dorothy Henderson Lodge and Newmarch House in Sydney, and most recently, 49 cases at the Cedar Meats processing facility in Melbourne.

There have been 97 deaths.

The WHO community transmission classification is given to countries “experiencing larger outbreaks of local transmission”, defined through an assessment of a large number of cases “not linked to transmission chains” and “multiple unrelated clusters in several areas of the country”, among other factors.

The number of confirmed COVID-19 cases reported from April 29 to May 5. Picture: WHO Source: Supplied

More than 70,000 people have died in the US while the UK has recorded almost 30,000 deaths – surpassing Italy on Tuesday to have the highest coronavirus death toll in Europe.

UK Foreign Secretary Dominic Raab acknowledged it was a “massive tragedy” but doesn’t expect “a real verdict on how well countries have done until the pandemic is over”, noting differences in the reporting of deaths.

“I’m not sure the international comparison works unless you reliably know that all countries are measuring in the same way,” he said.

The UK is classified by the WHO as primarily having community transmission of COVID-19. Picture: Justin Setterfield/Getty                      Images Source: Getty Images

‘WHAT WE DON’T WANT’

Dr Stanaway said finding all the cases means having a better chance of “blocking that transmission pathway”.

“It’s all about having a bit of control, doing more testing and having a better understanding of where the spread is in the community,” she told.

“When you get these locally acquired cases where you can’t identify the source, and we still do have some of those, there’s basically people there in the community who have spread it to that person that you don’t know about and you haven’t identified.

“That’s kind of an indication that there’s spread going on at the community level that you’re not picking up and that’s what we don’t want.

“That’s sort of behind a lot of the Premiers pushing for a lot more people to get tested.”

Ten per cent of Australia’s 6875 COVID-19 cases have been acquired locally from an unidentified contact, or 688 according to the federal health department’s data on Wednesday night, and just 1.3 per cent of all cases remain under investigation.

Australia’s cases by source of infection as of May 6, 2020. Picture: Department of Health Source:S upplied

“Obviously it’d be better if there were no cases that weren’t identified but 10 per cent is quite low,” Dr Stanaway said.

“I don’t think it will ever be possible to identify every source because there is evidence that some people are asymptomatic … there might be people that don’t get tested as well because they don’t realise they’ve got something.

“The more that people go and get tested, the more chance we have of reducing that number.”

Australia’s cases by source of infection in each state and territory as of May 6, 2020. Picture: Department of Health Source:Supplied

‘WE ARE LIKELY TO SEE OUTBREAKS’

National Cabinet meets for a second time this week to decide on easing the country’s coronavirus restrictions.

“I would expect that on Friday there’ll be some restrictions which are formally eased, which many states have already moved on and others are yet to move on,” Prime Minister Scott Morrison said.

“It’s our hope that where we get to on Friday can sort of lay out much more of the road map for Australians so they can see what’s happening in the weeks and the months ahead.”

Australia’s Chief Medical Officer Professor Brendan Murphy said the state and territory leaders had made it “very clear” the health system must be ready “to stop a very large outbreak” rather than just deal with one.

“By only relaxing a bit, we can test the system without risking a large outbreak. That’s the challenge,” he said.

Prof Murphy praised the work of the Victorian government for handling the Melbourne meatworks outbreak.

“These are the sorts of things we are likely to keep seeing over coming months, particularly if we do relax some of the measures,” he said.

“The most important thing is when we do get an outbreak, given the very, very infectious nature of this virus … we have to have that capacity to quickly test, trace, isolate and quarantine.”

RESTRICTIONS TO BE EASED ON FRIDAY

Deputy Chief Medical Officer Dr Nick Coatsworth told Today on Wednesday the Australian Health Protection Principal Committee had considered a vast range of restrictions and “how they might be lifted in a progressive fashion”.

“The nation’s put us in a great position to see some of those restrictions lifted,” he said.

“And I think what you’ve seen already is many of the states and territories have already gone to lifting some of those restrictions because their situation has been so good that they can do that.”

Dr Coatsworth said the approach will have to be “very staggered”.

“You lift one set of restrictions, you’ve got several weeks before you can see the effect on what’s going on with COVID-19, jump on any clusters that have occurred and then place Australia in the position for the lifting of the next round of restrictions,” he said.

“We may see small clusters, we are seeing small clusters, and the example set by the Victorian health department of how to manage that down in the meatworks is an excellent example of how we’re going to have to move forward.”

He said it was important for Australians to remember the lessons learned including hand hygiene, 1.5-metre social distancing and staying at home “if we’ve got any sense of a cold or a cough, and we have to get tested”.

Health Minister Greg Hunt on Wednesday said more than 627,000 COVID-19 tests have been conducted in Australia.

“In terms of our tracing, our public health units around the country are chasing down every new case and doing an extraordinary job,” he said.

There are 62 people in hospital with the infection. Twenty-seven of those are in intensive care units however 18 were on ventilators as of Wednesday, down from 20 the previous day.

“Each reduction means that fewer people are at risk of losing their lives to coronavirus,” Mr Hunt said.

With the imminent easing of more restrictions, Dr Stanaway said stepping up testing will be “really important”.

“As people start to mingle more, it is likely that transmission will increase because it hasn’t been eliminated from the country so it’ll just be really important for people to get tested, for this surveillance to be constantly going on in the community so if things start to increase we can do something about early,” she said.

“We’re in it for the long haul.

“We have to really change our whole thinking around how we respond to cold and flu symptoms. That’s going to be with us for a long time and hopefully if we do that, we can keep it under control and we won’t have to see what’s happened in other countries.

“We still have a non-immune population so we’re still at risk and we will be at risk until there’s a vaccine or a better treatment that reduces mortality.”