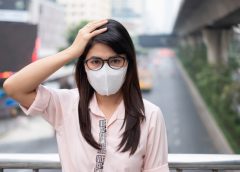 China has reported the highest number of new daily coronavirus cases in nearly six weeks, sparking concern of a second wave of the virus.

A comedian best known for his role in TV comedy The Goodies has died after contracting  coronavirus as global infections pass 1.7 million

UK Comedian Tim Brooke-Taylor, best known as part of 1970s comic trio The Goodies alongside Graeme Garden and Bill Oddie, died on Sunday morning. He is survived by his wife, Christine.

The US death toll from the coronavirus eclipsed Italy’s as the highest in the world at about 20,000. Globally more than 100,000 have died.

The death rate – that is, the number of dead relative to the population – is still far higher in Italy than in the US.

Worldwide, the true numbers of dead and infected are believed to be much higher because of testing shortages, different counting practices and concealment by some governments.

Our live coverage has wrapped for the day, here’s how it played out.